7 Financial Aspects That May Impact You This April 2021 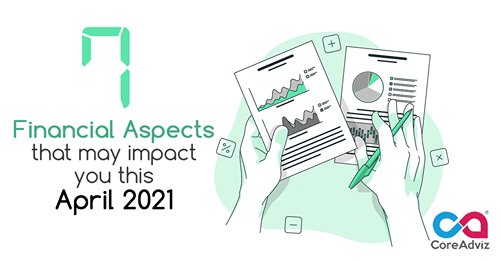 April 2021 marks the beginning of a new financial year in the UK. This means that there will addition and deletion to the current set of taxation rules including purview of schemes, household bills and other taxation areas. Here are the top 7 changes:

The threshold for personal allowance has been raised from £12,500 to £12,750. This means that an additional personal allowance of £250 has been given to the residents of UK. On the other hand, the higher-rate slab has also been increased by £270, meaning the bracket will now start from £50,270 instead of £50,000.

As you would be aware, £20/week was offered to families by the Government during the pandemic. The aid of extended to those who had substantially low income or were out of work. The arrangement was declared till March 2021. However, the same has now been extended to another six months whereby families and individuals would continue to receive the aid.

April 1 will mark the beginning of wage hike. As per the current provisions, employees below 23 years will get an increase of 2.2% in their national minimum wage band. Apart from this, employees above 23 years will also be able to avail the increased hourly rate of £8.91, instead of £8.20 previously.

To combat the current pandemic crisis, HMRC has allowed one-off £500 working tax credit payment. The arrangement has been done with a view to assist people via reducing their tax burden. If you are eligible for the same, then HMRC will intimate you of the same via text message. The amount will be credited to your registered bank account by 23 April 2021.

The current rate of water bills is expected to drop by £2 a year. So instead of paying an average of £410, people would now pay £408. However, situation is subjective to location as some areas may see a hike of £14 per year.

Players like EE, Vodafone and Three have already updated their latest price list which is higher than the previous year. This means that the phone bills are going to be higher. Three company has already made a hike of 4.5% to their current bill when compared to October 2020.

← Do I Need An Accountant If I’m Self-Employed?
Working Tax Credit – FAQs That You Wanted →

Get your proposals now

All proposals are free and non-binding