What Factors Are Affecting Your IR35 Status? 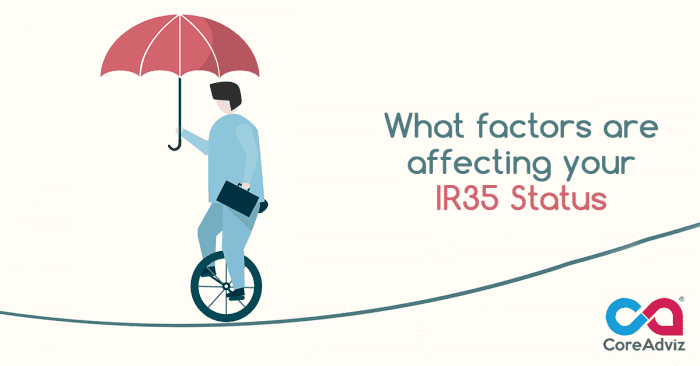 The IR35 is not something new in the UK. To put it in simple words, IR35 purviews the off-payroll working rules for people with effect from 6th April 2021. HMRC brought this rule into force because people were using the status of self-employed while working for a particular company. The benefit which was derived from this disguised employment was reduced tax liability. As per data published by the HMRC, as much as 1,70,000 people will be affected post-development of IR35 status.

If you are also one of those who fell under the IR35 status, make sure that the following three key factors determined by HMRC are taken into consideration

The basic principle of IR35 looks into the degree of control over affairs. When you enter into a contract with a company and the company has the authority to tell you about the work to be done, hours to be worked and place of work, it means that you are falling into the category of IR35 as it establishing a system which is more or less like an employer-employee relationship.

On the other hand, suppose you enter into a contract with a company under your own company’s name where details of deliverables and compensation is specifically mentioned along with the charges and deadline, then it would fall beyond the purview of IR35. The intent is important here as the relation should show that a deal has been cracked between two enterprises where the project comes to an end after the completion of task.

As cited earlier, the contract should be in between two companies. It opens up an avenue whereby your personal presence doesn’t hamper work. The substitution clause ensures that the company can send a substitute to offer the services as promised by you. However, the reason for substitution must be genuine. The hiring company reserves the right to reject the substitute, if the service is not as per the promised standard.

If you are carrying the work all by yourself though you have a substitute available, then you may fall into the purview of IR35.

Both the parties to the contract need to ensure that the obligations are justified. There should be a proper definition of work expectation/ deliverables along with the mentioned time period and cost. The contract should also include a detailed coverage on what is included within the scope of work and what is excluded. Any request made by the hiring company beyond the mentioned contract should not be done without further agreement/contract.

Determining IR35 status is difficult even though we now know what the factors are that are used to determine status. It has been introduced to eliminate the loophole that people were earlier exploiting to reduce their tax burden. Since the rate of tax as an employee is higher than self-employed, it was resulting in massive shift.

If you don’t think you fall inside IR35, you will need to demonstrate that these factors don’t apply to your contract and working practices. If you need help to determine if you are at the risk of IR35 feel free to get in touch with us via email: hello@coreadviz.co.uk / phone: +44 3301331114 to get more IR35 help.

Get your proposals now

All proposals are free and non-binding